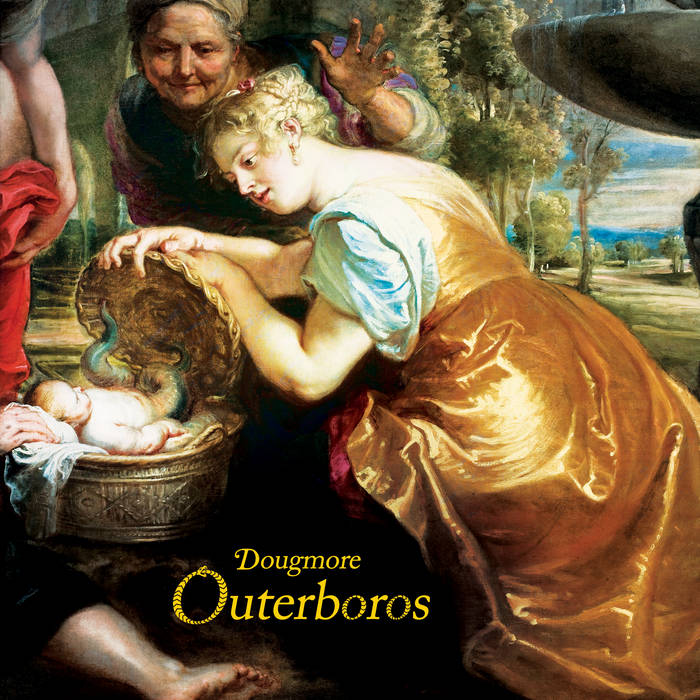 Greg Murphy I don't usually like folk but the arrangements are so well done it only took 3 songs to sell me on needing to purchase it.

"...one of the most challenging, haunting, memorable records you will hear this year." -- American Songwriter

"As Dougmore, the artist paints vast aural tapestries filled with uncanny lyrics that quote pastoral poets, while roiling banjo haunts the depths of his sometimes fantastical tunes." -- No Depression

"On 'Outerboros,' Dougmore is self-aware and his lyrics are vivd with a lucidity and assuredness that feels fresh and sincere." -- The Deli

Dougmore is the bold artistic project of native New Yorker Douglas Jay Goldstein, a decorated veteran within the contemporary bluegrass and folk music scenes. As a co-founder of Northeastern string-band Cricket Tell The Weather as well as playing alongside Woody Guthrie’s grandson Cole Quest, he has become well-known for his dexterity and sorcery as an award winning banjoist. Having honed his craft in the halls of conservatories as well as ashrams in the far reaches of India, Douglas has performed with progressive newgrass, traditional bluegrass, and indie string-band acts throughout the years and done his diligence exploring every corner of American roots music. All of his diverse influences
converge in the artist’s debut studio effort, Outerboros.

Throughout the album Dougmore employs lurid metamorphic imagery, drawn from ancient and medieval poetry and lore, to craft his own personal narratives and mythology, while refracting his vision through the prism of traditional forms and bending it back through an intertextual kaleidoscopic gaze. The character of Outer Boroughs is caught somewhere between the reality he lives and the stories he tells, slithering his way into a circle of believing his own lies as he sings “It’s the story of a boy, half skin and the other half scales, sits in his tower and devours every page of his tail.”

Recorded at NYC’s legendary “Magic Shop Studios”, the album features 10 tracks that showcase his craft as a composer, songwriter, and vocalist as well as Dougmore’s instrumental virtuosity. The eponymous title track sets the tone for the entire record, a Big Apple pun on the ancient symbol of a self-devouring snake “ouroboros”; through this theme, the record explores transformations, transitions, death and renewal, and negotiating thresholds— a metamorphosis botched, or a rite of passage gone wrong. The collection closes on an oracular hymnal true to the album's title, detailing Dante’s infernal depiction of the grotesque exchange of forms between man and snake ad infinitum, bookending the album where it began.

Outerboros is not your typical avant-American stomp: the album is a spellbinding gift to audiophiles everywhere and an invitation to the uninitiated on a daring otherworldly musical voyage.

Bandcamp Daily  your guide to the world of Bandcamp